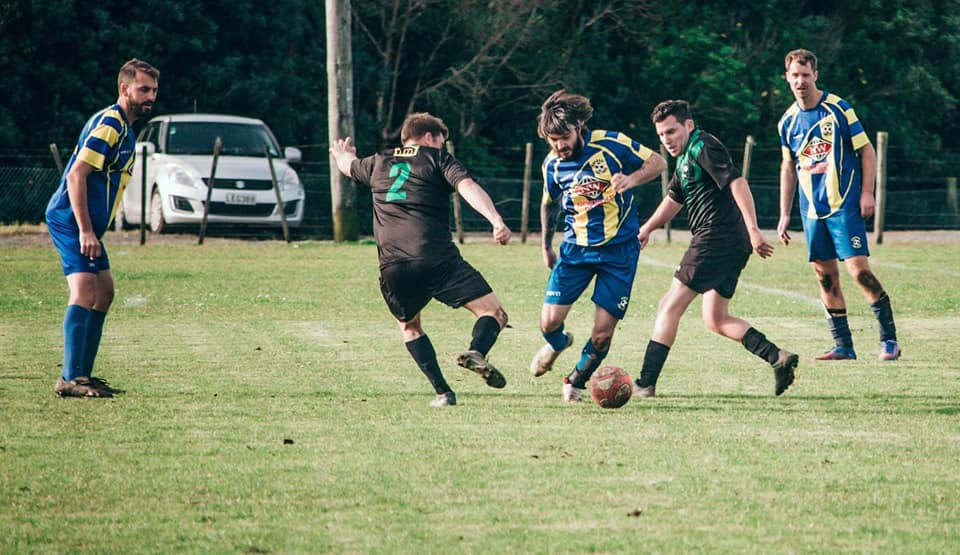 It was a big weekend for the club, with all three senior teams at home ; alongside the annual quiz night on Saturday evening. This resulted in plenty of support throughout the weekend!

Onerahi came into the match on a high, with their emphatic win over the previously unbeaten Kerikeri last week lifting them to the top of the table.

They were up against a talented young Hatters side however ; themselves having pushed Kerikeri twice ; finishing 2-2 at the 90 minute mark in recent League and Cup encounters.

It was the home side who started strongly, and opened the scoring 20 minutes in when a Dan Hanmore cross from the left was drilled low past the keeper by Jake Boom.

Despite dominating large periods, Onerahi could not find a second however ; and were made to pay when a 50/50 turnover and subsequent free kick saw the visitors draw level with 10 to play.

A tense finish ensued ; but neither side was able to find a winner in the closing stages, finishing all square at 1-1.

The result sees the title race tighten further ; with Kerikeri, Bream Bay, and Onerahi now on 22, 21, and 20 respectively. This makes for another crucial clash next week ; with Onerahi at home to Bream Bay in what is already shaping as a must-win encounter!

With the two teams having developed a strong rivalry in recent times ; the visiting Paihia were looking to reverse a tight 1-2 loss in round 1, and keep themselves alive in the title race.

It was a tight tussle from the start, Onerahi making inroads down the flanks, while Paihia’s more direct approach also produced chances.

It was one of those probing wide attacks that saw Aaron Gravatt brought down just inside the box on the 25 minute mark, and Gareth Carrothers stood up to bury the penalty kick. He would suffer an injury in the process however, and play no further part in the match.

Paihia would be the next to strike, bundling the ball home when Onerahi were unable to fully clear from a corner early in the second half.

This spurred the home side who swung straight back onto attack through a decisive run from Fin Aitken-Buck ; whose blocked shot fell to Adam Willets to calmly restore the lead just minutes later.

By the final quarter Onerahi had lost both starting wingers as well as Carrothers to injury ; but had enough bench strength to hold out the visitors, despite some tense moments!

While not a vintage attacking display, the home side were happy to grind out another win against a tough opposition.

Player of the Match was Fin Aitken-Buck for another Energiser Bunny-esque display in the middle of the park!

In what must be considered one of the visitor’s best performances this season, they took the fight to the home team; with Onerahi battling into the elements in the first half and finding themselves 1-2 down at the break.

In the second, Onerahi managed to pin the opposition down in their own half for large periods, but the visitors remained determined and it took two quality strikes from the left and right feet of Curry to see Onerahi home 3-2 in a tight contest.

While Curry and Emma had very strong games, it was Bella who was the standout. Playing down the right hand side, she created numerous attacking chances and defended stoutly for the full 90 minutes in a top quality Player of the Match performance.

Next week again sees home encounters for all three of our sides, with Div 1 Men vs Bream Bay, while both Div 3 Men and Div 1 Women take on Madhatters.

Thanks for your support and see you again next week!